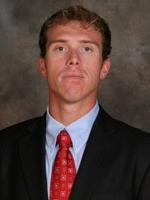 Andrew Carey, Head Men’s Lacrosse Coach at Huntingdon College in Montgomery, AL. Carey started the NCAA D III program at Huntingdon in 2011, which began competition in 2012 and has been growing with success each season.

The Hawks won the first game of their inaugural season and finished the season with a 5-10 record. Huntingdon posted a 7-8 record in 2013, with three losses decided by one goal.

Huntingdon improved in 2014 and turned out its first 10-win season in program history, going 10-6. The Hawks captured their first winning season; defeated Birmingham-Southern for the first time is program history, scored a program-record 185 goals while allowing 147 goals.

The Hawks battled hard in 2015 to a 6-13 record and ended the season with a 13-12 triple-overtime loss to Ferrum in the SEILC Championship game. The Hawks finished its 2016 campaign with an 8-10 record, with four losses decided by one goal.  2017 saw the hawks return to their winning ways with a 10-8 record, second place finish in the SEILC Regular Season standings and another SEILC Semifinal appearance.

The 2018 season turned out the most productive to date.  The 7th year Hawks won the inaugural USA South Regular Season and Tournament Championship, capturing the programs first birth to the NCAA Tournament and participation in the NCAA 2nd Round.  The Hawks finished the season 16-3 and undefeated against USA South Competition.  Carey was named 2018 USA – South Coach of the year and the hawks placed 5 team members on the all-conference teams with Junior Face Off Midfielder Sam Hitt garnering player of the year honors.  The 2019 Hawks again cruised to a 12 – 7 record and an undefeated 7 – 0 in USA South play and winning the regular season Championship.  The Hawks fell in the USA South Tournament finals by one goal that season.

Before Huntingdon, Carey spent three seasons as an assistant coach at Greensboro College. Carey was responsible for a variety of tasks, including coaching in both a game and practice setting, preparation of individual practices, fund raising and promotion of the lacrosse program and the recruitment of student-athletes.

During his time at Huntingdon, Carey was named head coach for the USAAI men’s lacrosse team from 2013 - Present.  Over that time, Carey has coached USA Teams to play in Scotland, Germany, Czech Republic, and Australia.

Prior to joining the coaching ranks, Carey enjoyed a successful playing career with the Pride. He was a four-year letter-winning attackman and finished fifth all time in goals scored for his career.

In addition to his experience at the collegiate level, Carey also coaches and directs the Shred Thread United Select High School Team since 2014.   During the summer of 2010, he served as a head coach and assistant director of the Greensboro Select Lacrosse Club. Also, during the summer of 2010, he was a head coach and actively involved in the Triad Blackhawks Lacrosse Club.

A native of Salisbury, Md., Carey earned his bachelor's degree in Kinesiology from Greensboro College in 2007 and holds a Master’s Degree (2021) in Sports Management from Auburn University of Montgomery.  Carey resides in Montgomery with his daughter, Clover Elizabeth.